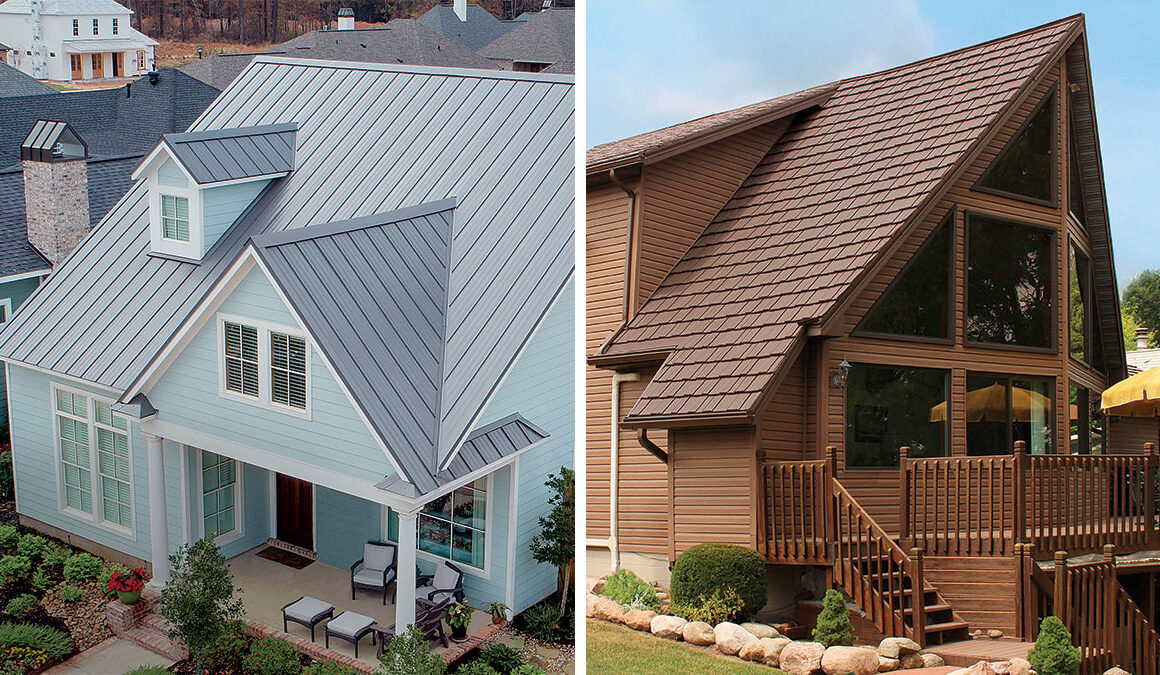 With regards to high quality roofing materials, slate is right up at the top, and it is joined by numerous metals, such as copper and porcelain coated steel. In case you are debating re-roofing with one such beautiful – and expensive – materials, here is a handy comparison to think about prior to making a final decision.

Normal weights for slate roofs are cited as approximately 9 to 25 pounds for every square foot. This would suggest one of the slimmer slate roofs options for a roof in a huge home would weigh anywhere in the range of forty tons – and the weightier options up to 100 tons! It’s a serious concern for a re-roof, because architectural reinforcements might be necessary. In seismic zones, having so much material over your head can be reason to be concerned.

The metal roof is much lighter, with a weight of about 7 tons on a huge home. In addition, numerous profile are interlocked together to make one more sheer layer resisting movement of the roof framework. Although no guarantee that the significant earthquake will not damage a house, 30 plus fewer tons of dead weight above your head provides a lot of order of magnitude of safety compared to weightier denser materials.

The normal problems with slate roofs are cracking, “nail sickness,” delaminating, damages by way of visitors and slippage. Repairs are hard and costly and seldom well-concealed. Moss is also something which is vulnerable to growth in slate roofs as all the sides and crevices offer a foot hold for the sturdy plant. It’s something which a few people want to see, but it actually leads to the destruction of the slate roof assembly and will ultimately cause severe damage.

Among the benefits of metal roofs is that they are as near to zero maintenance as any building exterior could be. Not only is it light and rigid, there isn’t any chance they will build up moss – and even if this found a spot to grow it could not break the metal. Additionally, copper, zinc, or porcelain don’t fade, and won’t ever need any attention.

The common range for good quality slate roofs is $10-$20 per sq . ft ., so going to the absolute low end of that scale suggests numerous concerns about the standard of the slate. Cutting corners – particularly on the caliber of the slate itself – is sure to raise the likelihood of maintenance problems in the future. When selecting slate, there are 2 main factors: thickness and grade. Typically, the slimest is the 1/4′ and better materials increase after that. Purchasing at the low end of slate implies selecting among the thinner items and the thinner the product, the more at risk of the issues of a slate roof (breaking, slipping, etc). Also the cheaper grades are susceptible to fading from direct exposure to sunlight. Particularly if a black shade is essential, you’ll need to ensure that you are updating to a quality level of slate which is categorized as “unfading.”

Energy efficiency is a main thing to consider in picking a roof nowadays, and whenever you install a slate roof you are literally placing hot rocks next right alongside your roof deck. It’s made worse by selections of dark, “formal” colors. This heat may then be conducted into the attic and raise the demand in your A/C system.

Among the established benefits of the porcelain diamonds installed over the thermal liner is that the mix of the air-space below the shingles and also the insulation value of the liner implies that a part of the heat which hits the roof would be conducted into your house. This set up also cools off quickly the moment the sun stops hitting your roof. Very little other material in the color black is capable of any level of energy efficiency – other than metal! In most case, the result of picking a metal roof having a thermal liner is a more energy-efficient system. Your carbon footprint would be a lot less with the metal roof system and you will be minimizing the contribution of greenhouse gases because of a lower energy demand from your house.

This is not to say that slate is a poor choice – far from it! Variations of slate roofs have been in existence as successful roof coverings for years. However comparing to metal, there are certainly aspects to be considered.